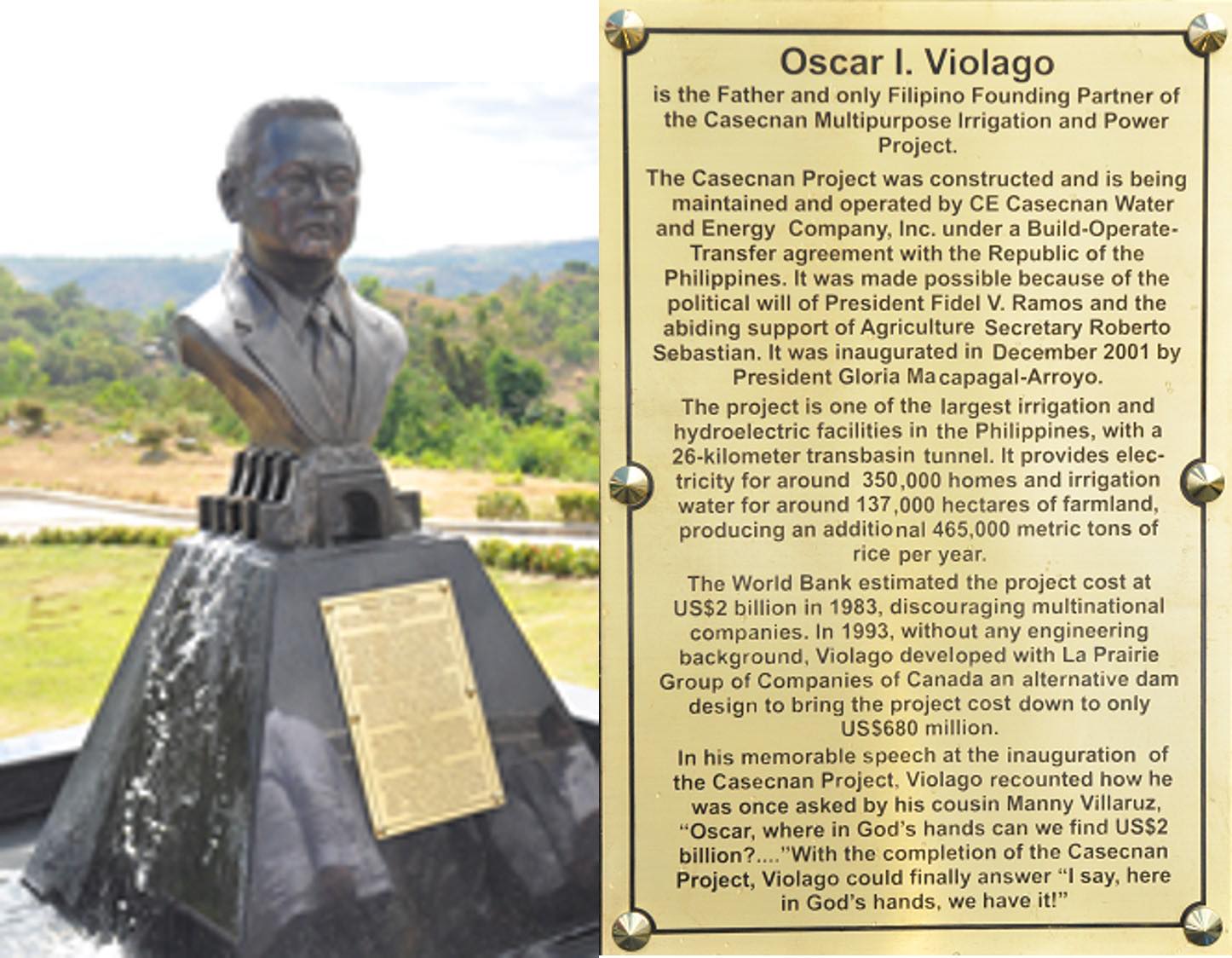 SLRB developed the Casecnan Project in 1993 during its hiatus stage, after several large multinational companies did not want to invest in it because of the high project cost of Two Billion U.S. Dollar ($2 Billion) as recommended by the World Bank in 1983 and the risk of flooding a whole tribal community. By taking on the project, Mr. Violago, without knowing the difference between a megawatt and a kilowatt but realizing the great benefits that it will bring to his home province Nueva Ecija and portions of Bulacan, was able to introduce an innovative design, together with his partner, La Prairie Group of Canada, which lowered the project cost to Six Hundred Eighty Million U.S. Dollar ($680 Million), without risk of flooding, and making the project highly feasible and socially acceptable.

Operational since 2001, the Casecnan Project, the project is now irrigating 137,000 hectares of new riceland thereby producing an additional 465,000 metric tons of rice per year. The farmers in Nueva Ecija can now plant throughout the year even during the El Niño phenomenon. It is also producing 150 MW of hydropower and created 18,000 new jobs in the process.

Because of this achievement, Mr. Violago’s bust was unveiled and inaugurated last January 30, 2014 at the CE Casecnan Power Plant in Pantabangan Nueva Ecija, honoring him as the father and only Filipino Founding Partner of the $680 Million Casecnan Multi-purpose Irrigation and Power Project. Former Philippine President Fidel V. Ramos and Mr. Joseph Sullivan, President of CalEnergy Philippines, (a subsidiary of Mid-American Holdings Co., owned by Mr. Warren Buffett) presided and witnessed this historical event.

Other benefits of the Casecnan Project

The living conditions of the the indigenous Bugkalot tribe greatly improved because of the Project:

As this was the first Build-Operate-Transfer (BOT) project under the strong and decisive political will of former Philippine President Fidel V. Ramos, it will be transferred to the Philippine government in 2021. Forty percent of the hydropower income, amounting to billions of pesos, will be owned by the National Irrigation Administration (NIA) and greatly help NIA in funding its operations.

Other infrastructures like health centers and clinics were built. New schools were constructed and scholarships were given to qualified students by the Project.

Peace and order was achieved as the NPA problem was eliminated due to the prosperity brought about by the project.

Aside from the billions of pesos paid to the national government, the project has remitted around P400 million per year in taxes to the provinces of Nueva Vizcaya and Nueva Ecija transforming the municipalities of Pantabangan in Nueva Ecija and Alfonso, Castañeda in Nueva Vizcaya from a fourth and fifth class municipality, respectively into first class municipalities. The standard of living of the people in those areas have vastly improved, giving them a brighter tomorrow. As a result of this accomplishment and for his invaluable contributions, Mr. Violago was given the “Natanging Novo Ecijano” award by the Province of Nueva Ecija and a Plaque of Recognition by the Province of Nueva Vizcaya.